If you didn’t know it yet, Kenyan chillies stand out worldwide. The market appreciates Kenyan chilli peppers because of the commitment of the farmers to produce quality products. Similarly, chilli exporters in Kenya, including FrutPlanet, commit to ensuring they only ship quality.

At FrutPlanet pepper exporters in Kenya, we source the chillies from the farmers for you. But why should you trust us?

We have been in the fruit and vegetable exporting industry for a long time networking with the right farmers. We have the export logistics laid out and can supply chillies to any global market. And at the heart of our operation is customer satisfaction which requires us to adhere to specific quality standards.

Kenyan chilli peppers are unique because of their zest. The spiciness makes it a key ingredient in many cuisines worldwide. If you want to add that extra kick to your food, then Kenyan chillies are what you need.

Kenyan chillies have a higher Capsaicin concentration than other types of chillies. Capsaicin is the chemical compound that gives chilli peppers their characteristic pungency.

The Scoville Scale is the most common way of measuring the capsaicin concentration in chilli peppers. And by this measure, Kenyan Chillies fall under the extremely hot category with a rating of more than 100,000 SHUs. However, farmers have diversified to farming less hot chillies too.

The Types Of Chillies FrutPlanet Exports (With Pictures)

There are many types of chilli pepper grown commercially in Kenya and FrutPlanet exports. Although this list is not exhaustive, here are the most common types of chillies:

These Chillies Have A Sweet And Tangy Taste And Are Used In Salads, Salsas, And As A Garnish. The chilli has roots in  South Africa and since its introduction to the markets in the early 2000s.

A story has it that a farmer discovered the chilli in the 1990s and described its taste as peppery yet sweet as dew. 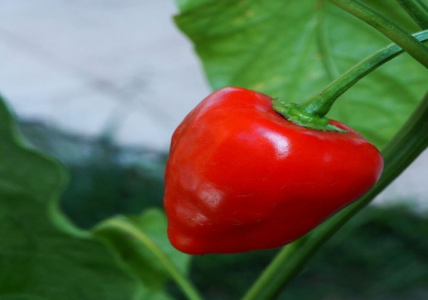 From his description came the name Peppadew Chilli.  A South African company that sells food products has since patented the name.

Peppadew Chilli, Piquant pepper, measures 1177 heat units on the Scoville scale. Scoville scale rates the level of heat (hotness) a chilli has. The rating is average, lower than most chillies, and has to range at 5000 Scoville heat units.

The Guajillo chilli is one of the world’s most popular types of chillies today. The Chilli has roots in Mexico and various Chile Peppers under the Capsicum Annuum species. 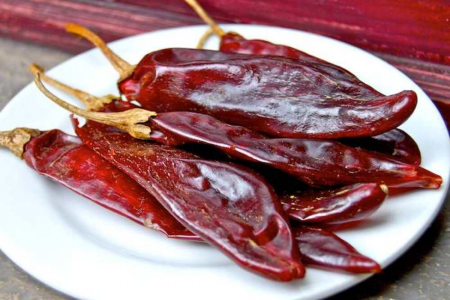 Most markets love Guajillo Chilli dried for easy transportation and prolonged storage time without losing taste. This chilli has a leathery texture with a deep red colour and thick skin. It’s a significant player in the dried chilli market in Kenya and worldwide.

The Guajillo Chilli has a mild heat with a tangy, fruity taste. Its heat ranges between 2500 to 5000 SHU on the Scoville Scale. Its taste explains why most customers use it in stews, sauces, and salsas.

African Bird’s Eye, known as Piri Piri or the African Devil, is a small, extremely hot chilli. The chilli is native to Africa and a variety of the Capsicum frutescens species. South Africans initially found the Chilli in the wild but farmers since the 2000s have grown it commercially. 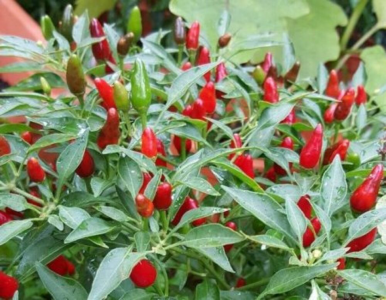 Despite its small size, the African Bird’s Eye has a Scoville scale heat range between 50000 and 175000 SHU. It matures to a bright red colour, and you can use it fresh or dried to spice up food.

It is a critical ingredient in the popular African dish, the South African Piri Piri chicken. The dish was first introduced to Africa by Portuguese settlers in the 1500s and has since become a popular delicacy.

The Red Cayenne pepper is a long, thin chilli that matures to a deep red colour. The chilli is native to Central and South America, but it derives the “Cayenne” name from the capital of French Guiana. However, most chilli enthusiasts grow it locally for commercial reasons. 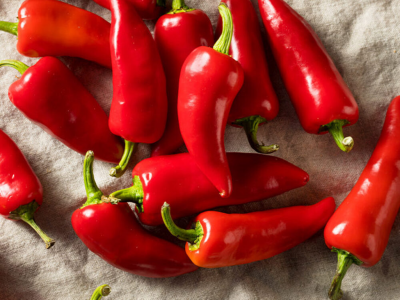 Red Cayenne pepper is one of the world’s most popular chilli peppers. Its a source of provitamin A preformed vitamin A and other nutrients. Its popularity and nutritional value have consequently increased its market demand, mainly in America and Europe.

Most people use it fresh, dried, or powdered to add heat to dishes. The chilli has a Scoville scale heat range between 30,000 and 50,000 SHU.

Paprika peppers are a sweet, mild chilli typical in Hungary and other parts of Central Europe. Although they initially originated from Mexico, the name Paprika is a Hungarian word that means pepper. The chilli is a variety of the Capsicum Annuum species and matures to a bright red colour. 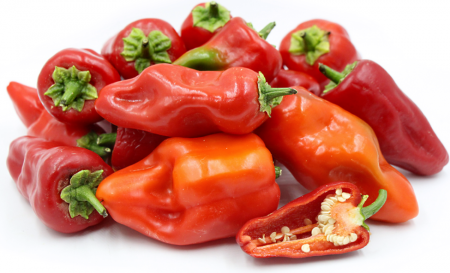 Paprika peppers are popular among dishes such as deviled eggs.  Most cooks use it fresh, powdered, or as flakes to add flavour and colour to dishes. The paprika pepper has a Scoville scale heat range between 250 and 1000 SHU.

This Chili is relatively long and grows to a large, 8-inch long pepper. Most pepper exporters in Kenya, including, FrutPlanet, ship the locally grown Paprika Pepper to the United States and Europe.

The Poblano chilli is a dark green, mild chilli native to Mexico and the most common amongst the types of green chillies. The chilli is a variety of the Capsicum Annuum species and matures to a dark green or red colour. It measures between 2 and 8 inches long and 1 and 3 inches wide. 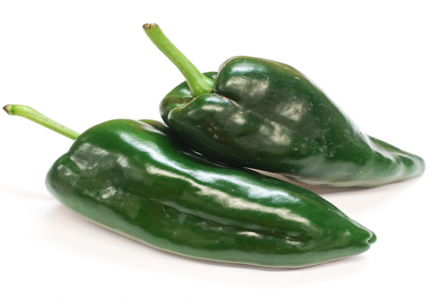 Poblano chilli is a popular ingredient in the Mexican dish Chilli Rellenos. The dish consists of roasted Poblano peppers stuffed with cheese and fried. The chilli has a Scoville scale heat range between 1000 and 3500 SHU.

Due to its thick skin, it’s a great recipient of the dried chilli market in Kenya. The plant performs well in the Kenyan region, with temperatures ranging between 20 degrees Celsius and 30 degrees.

The Jalapeno chilli is a small, hot chilli native to Mexico. The chilli is a variety of the Capsicum Annuum species and matures from green to red. When green, this chilli is less hot, but the hotness increases as it matures and turns redder. 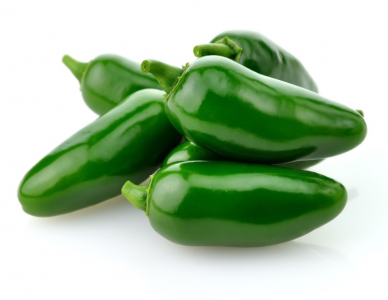 Jalapeno chilli is a popular ingredient in Mexican and Tex-Mex cuisine. Enthusiasts often use it in nachos, salsa, and guacamole dishes. The chilli has a Scoville scale heat range between 2500 and 8000 SHU. However, the SHU rating may extend up to 20000.

When growing Jalapeno chilli in Kenya, it’s important to note that the plant is a heavy feeder. It requires well-drained soils with a lot of organic matter and temperatures ranging between 65 and 80F.

The Bishops Crown chilli is a small, three-sided chilli native to Peru and Bolivia. It measures between 2 to 3 inches wide and 1 inch long. The chilli is a variety of the Capsicum baccatum species and matures to a red colour. 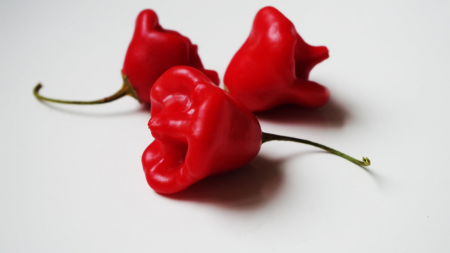 The Bishops Crown chilli is a popular ingredient in Caribbean cuisine. You can use the chilli in curries, stews, and rice dishes. The chilli has a Scoville scale heat range between 100,000 and 350,000 SHU.

When growing Bishops Crown chilli in Kenya, it’s important to note that the plant requires well-drained soils. The soil should also be rich, with temperatures between 77 and 82F. 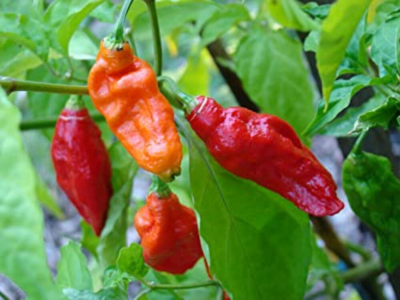 The Ghost Pepper is a small, red chilli native to India. The chilli is a hybrid parentage between the Capsicum Chinense and the Capsicum frutescens varieties. The pepper matures to a red colour that measures between 2.5 and 3.3 inches long.

The Ghost pepper is a spice in Indian cuisine in dishes such as curries, stews, and rice dishes. FrutPlanet Pepper exporters in Kenya have an excellent market for Ghost Pepper in India and other Asian countries.

The Carolina Reaper chilli is one of the world’s hottest chilli peppers. The chilli is a variety of Capsicum Chinense, but its parentage is a hybrid of the Ghost Pepper and Habanero. 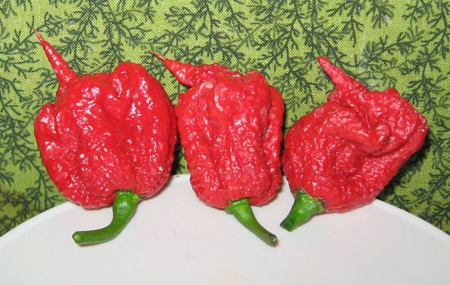 It matures to a bright red colour and has a Scoville scale heat of over  1,500,000 SHU. Most use the chilli in fresh or dried to add heat to dishes, although not many people love that level of heat.

So there you have it – a comprehensive guide to the different types of chillies and their associated heat levels. But what if you’re growing different chilli varieties or are looking for a Chilli exporter in Kenya?

FrutPlanet is a leading fruit and vegetable export company that handles all your logistics. Apart from chillies, we offer export services on other fruits and vegetables. Contact us today to learn more about our services!